SOCIETY Magazine spoke with H.E. Tebogo Seokolo, Ambassador of South Africa about his country’s progress and achievements and his term as a leading diplomat here in Austria. 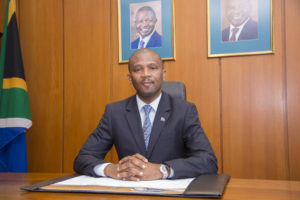 Since 1994, bilateral relations between South Africa and Austria have been cordial. Over the years, there has been an exchange of high-level official visits between the two countries. In October 2016, the former Austrian Foreign Minister and Chancellor, Sebastian Kurz visited South Africa. In December last year, Minister of Communications, Stella Tembisa Ndabeni-Abrahams, visited Austria to attend the Africa – EU High Level Forum. The two countries have also signed a number of agreements including the MOU on Scientific and Technological Cooperation between the South African Department of Science and Technology and the Austrian Ministry of Science, Research and Economy in 2015. South Africa is Austria’s most important trading partner in Africa. One third of Austria’s exports to Africa are destined for South Africa. Currently South Africa’s total direct investments in Austria amount to more than 62 149 million South African rands, while the Austrian direct investments to South Africa amount to 12 018 million. In the tourism sector, about 30 119 Austrian tourists visited South Africa in 2018, compared to 23 000 five years ago.

After the presidential and Member of Parliament elections on May 8th, which are the priorities?

In his State of the Nation Address in February this year, President Ramaphosa indicated that the task of building a better South Africa is a collective responsibility of the entire nation and the people of South Africa. This task is at the centre of the work of every department of government, of every agency, of every public entity and informs every policy, every programme and every initiative.

The President identified the following five most urgent tasks that will underpin the work of the government this year and in the medium term, namely: the acceleration of inclusive economic growth and creation of jobs; the improvement of the education system and development of the skills that are needed now and in the future; improvement of the conditions of life for all South Africans, especially the poor; stepping up the fight against corruption and state capture; and strengthening of the capacity of the state to address the needs of the people.

What will be the steps taken to solve the issues for the majority of black people in the fields of education, housing for poor people and the eradication of poverty?

South Africa attaches great importance to education. As Nelson Mandela said, “education is the most powerful weapon which you can use to change the world“. In the past 25 years since our democracy, South Africa has expanded access to education for all, especially for children between the age of 7 to 14.  Further, the number of students who passed grade 12 has increased from 51 percent in 1994 to 78 percent in 2018. While in 1994, only 51 percent of South Africans could read and write, now the number has increased to 94.3. With effect from 2018, South Africa introduced free higher education for students from the disadvantaged background. The strategic objective of our government in the field of housing is to address a huge housing backlog bequeathed by the apartheid system and change the apartheid spatial planning and human settlements. This will be achieved by transforming human settlements in South Africa into equitable and efficient spaces with citizens living in close proximity to work with access to social facilities and essential infrastructure. Since 1994, our government has built 3.2 million free houses benefitting over 14 million people from poor disadvantaged communities.

Since the inception of democracy in South Africa in 1994, our government has introduced a range of measures in order to create a better life for all our people. The targeted groups in this regard mainly included the older people, the unemployed – especially the youth – children, women, people with disability and people living in poor areas. Over the past 25 years, the government has provided 17.5 million citizens from vulnerable groups with social grants. With effect from January this year, a minimum wage has been introduced which will improve the lives of over six million workers. Other measures introduced included free primary health care, no-fee paying schools, housing and free basic services (water, electricity and sanitation) to poor households. Although these policies and interventions have resulted in notable gains in poverty reduction since 1994, much more still needs to be done.

What are the steps taken against corruption?

Our government has undertaken several measures to root out corruption in both, the public and private sector. Since he took over the presidency of the Republic in February 2018, President Cyril Ramaphosa has appointed several commissions of inquiry to probe allegations of corruption and malfeasance in the public sector and in state owned enterprises, investigate the management and governance of the State revenue collection agency and probe the conduct of top officials in the National Prosecuting Authority. Some of these commissions have already completed their work and action has been taken against those on the wrong.

These commissions are critical to ensuring that confidence in public institutions is restored and that those responsible for any wrongdoing are identified and subjected to the full might of the law.

You are celebrating the 25th anniversary of the end of the apartheid regime. How has South Africa changed since then? What are the main results in the fight against racism since the abolition of apartheid?

Apartheid was predicated on the ideology of racial domination and exploitation of the black majority by the white minority in South Africa. This system was enforced by the State over decades and became official government policy. With the inception of democracy and freedom in 1994, this system was dismantled. Consequently, the new South Africa adopted a progressive Constitution with a Bill of Rights, which entrenches the founding values of human dignity, equality and the advancement of human rights and freedoms.

South Africa has also passed legislation such as the Promotion of Equality and Prevention of Unfair Discrimination Act of 2000 to address the issue of racism.

To fight racism in the long term, our government has adopted a National Action Plan to combat racism, racial discrimination, xenophobia and ethnic intolerance. The plan is an important tool to prevent and combat racist, sexist, homophobic, xenophobic and other discriminatory conduct and forms of prejudice.

Who are the main economic partners of South Africa in an international context?

South Africa has diversified its economic relations with many strategic partners in the world. The EU combined accounts for a significant volume of foreign direct investments in our country.  In Europe, countries such as the United Kingdom, Germany, The Netherlands, Switzerland and France are among the leading investors in South Africa. There is of course potential for Austria to increase its investment portfolio in South Africa. Beyond Europe, South Africa is also part of other strategic formations like BRICS and IBSA.

The African continent is the centrepiece of South Africa’s foreign policy and economic development.  South Africa has welcomed and ratified the agreement establishing the African Continental Free Trade Area, which once entered into force, will constitute the largest free trade area with a market of over one billion people with a combined GDP of approximately $3.3 trillion.

You grew up during Apartheid, who inspired you to enter the diplomatic service/a political career?

Most of the young people of my generation and those before us were part of a movement that fought for freedom and democracy in South Africa. We were inspired by the veterans of our struggle like Nelson Mandela, Oliver Tambo, Walter Sisulu, among others. We joined the struggle because we wanted to change the conditions into which we were born, which subjected us to indignity based on the colour of our skin.

Many of us joined the public service after the end of apartheid in order to contribute towards building a new democratic post-apartheid State. It is a task that we continue to discharge with pride.

Looking back to your activities as Ambassador to Austria and the International Organizations, what were your experiences?

As our tenure here in Austria draws to a close, I am satisfied with the milestones that we have achieved over the last five years. As a country that is committed to multilateralism, we have played an active role in promoting, not only South Africa’s interests in many international organisations in Vienna, but also those of the developing countries. Our efforts have been recognised through our elevation to the leadership of some of these organisations such as Chairperson of  the IAEA Board of Governors, President of  the Board of UNIDO, Vice Chairperson of the Prepcom of the CTBTO.

For example, at the IAEA we have – together with Germany – championed the renovation and modernisation of the IAEA Nuclear Applications Laboratories, which provide vital support to Member States to use nuclear science and technology to achieve their national and regional development goals.

At the UNODC we have – also together with Germany – championed the universal implementation of the United Nations Minimum Standard Rules – the Nelson Mandela Rules – which seek to improve the management and conditions of prisons across the globe and promote the humane treatment of prisoners.

We have also made strides in further strengthening bilateral relations between South Africa and Austria. In 2016, we organised a highly successful Tribute to Nelson Mandela Concert, which featured two prominent South African opera singers, Pretty Yende and the late Johan Botha, at the Wiener Konzerthaus. The proceeds from this concert went towards the building of The Nelson Mandela Children’s Hospital in South Africa, a project that Mr Mandela initiated before his eternal retirement.

Do you have a personal motto?

I believe in a motto: ’Your legacy is every life you have touched’. Diplomacy provides me with a unique opportunity to advance this goal while serving my country.