SOCIETY publisher Gertrud Tauchhammer met the Ambassador of Romania to Austria, H.E. Bogdan Mazuru and talked about Romania’s EU presidency and the challenges and chances it implicates. 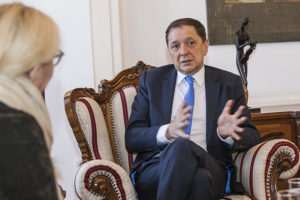 Romania took over the EU presidency on January 1, 2019 – which topics will the country focus on?

The motto of our presidency is “Cohesion – A Common European Value” and our focus will lie on strengthening and consolidating the cohesion within the European Union. With the challenges we are facing these days, among them the Brexit, the migration issue and a global world that is becoming more and more unpredictable and volatile, the European Union needs not only a political cohesion but also an economic one, unity and solidarity. We want to strengthen these attributes, because these are the concepts on which the EU is built on. Also the convergence of the European countries as well as a safer Europe – which was Austria’s EU presidency priority – are important. We want to continue making Europe safer, try to strengthen its global role and to consolidate the European values such as democracy and individual freedoms. These are the main subjects to focus on but of course there are other more specific challenges we are facing.

What are these specific challenges?

Brexit for example, is a huge challenge – in a few days the British Parliament will decide about its outcome and according to these decisions the future relationship between the EU and the United Kingdom needs to be defined. Of course we are not happy with the UK leaving the EU. But this was the decision of the British referendum, and, anyway, inside or outside the EU, the UK remains a very important European country.

Another challenge will be the decision on the post 2020 financial frame of the EU. Besides this, migration will remain an issue to be solved.

During the EU-presidency of Austria, there was not such a big focus on migration – do you think that during this presidency there will be a bigger one on this issue?

There are still countries that have different views on the solutions to be taken, but the migration issue needs a consensus, which will be a challenge for the EU. In these situations, a president in office needs to operate as an honest broker and as a mediator and needs to try to navigate in such a way to reach a consensus.

What is the current position of Romania on this topic, regardless of the EU-presidency?

Firstly, we need to strengthen the security at the boarders of the European Union, this is very clear. In this respect, the European Agency Frontex is very important. There has been a lot of progress already, but it needs to be continued. Secondly, we should focus more on the relationship with countries outside the EU, which are either sources or transit countries for migration. The relationships with African countries and with countries in the Middle East or with Turkey, which is an extremely important partner of the EU in this respect, should be improved.

Do you think that the African issue becomes more important for your current EU presidency than it was for the Austrian presidency before? Will there be another African summit?

Of course, the relationship with Africa is important for the European Union, and not only because of migration. The last summit – which I think was a very good idea of the Austrian presidency – showed that there are a lot of other important topics that need to be discussed with the African countries. Irrespective of migration, the relationship with African countries will still be a priority.

It is open if there will be another African summit because the last one took place only some weeks ago but this does not mean that we will not continue with the EU – Africa relationship as an item on our agenda in the next six months.

How would you define the importance of the EU for Romania?

We cannot see a future for Romania without the EU. It plays a part in our development as a country and as a nation. It is our common home. We see it not only as a mere political or economic institution but also as a common space for culture and history. It has a very strong symbolic value. From this point of view, Romania is a very pro-European country. The fact that Western Europe has been a place of democracy and prosperity for so many decades after the Second World War was – in a large measure – due to the European Union. The success of the European Union is something that can be measured and of course we want this to continue. We see what the EU has represented for its member states in all these decades and we want to replicate this success for Romania.

What do you think about the preferentially negative news coverage of Romania’s presidency? Are you personally unhappy about it?

The media does what it does. It does its job. The internal political developments in Romania will not affect our performance as president in office of the European Union.

I have never questioned the liberty of the media to talk about any topic it wants. This is free media and a free press, so I cannot comment on this. This is up to the journalists, and I am none.

Do you think that there will be a change in the government in Romania during the presidency?

I am not a part of politics and politics is not an exact science, so you never know but I don’t expect it.

Let us talk about your professional career as an Ambassador. Where have you been before coming to Austria?

I studied computer engineering, which is not exactly connected with the field I work in now. My diplomatic career started in Washington, after this I was Ambassador in Brussels for NATO, then I became Ambassador to Berlin, then Ambassador to Paris and now I am here in Vienna.

I became a diplomat more by chance. In 1991, I saw an article in a newspaper which said that the Foreign Ministry in Romania was looking for young people with knowledge of foreign languages and some basic knowledge about international politics. It was the change of 1990 and of course the Foreign Ministry was looking for “fresh blood” and I was curious but I never actually thought of becoming a diplomat. It was more by curiosity that I participated in these recruitment process which was a quite serious one in that time. We had written tests, oral interviews and in the end of the day, they said I won the contest and then the question came whether I really wanted to become a diplomat or not – and I decided to go for it.

Tell me now, what is your personal motto as a diplomat?

I don’t have a personal motto, I am just doing my job.